You are here: Home1 / Blog2 / Ecosystem3 / What is FoodTech? Technologies for the food sector

The technologies we know are becoming more and more advanced. It seems that there is always a new virtual platform to revolutionize the way we communicate, a phenomenon that has grown stronger in the age of covid.

In parallel, the way we humans perceive food has begun to change in recent years, empowered by a greater awareness of the inefficiency of the traditional food system and its impact on the planet and animals. This change in perspective has naturally stimulated a shift in the global food supply.  This is where the crucial role of food technology, or foodtech, comes in.

Foodtech as a concept is nothing new. Our ancestors have been modifying food for thousands of years. Even the process of putting food in salt to preserve it can be considered a primitive manifestation of foodtech.

However, foodtech as a term has had much greater relevance in modern times. It represents the sophisticated changes we are currently experiencing. Today’s foodtech is not a simple and concise term, but rather one that encompasses all those agents that apply technology to the agri-food value chain. From production to consumption of food, technology is bringing efficiency, safety, and a significant improvement in sustainability.

Foodtech nowadays goes far beyond the mere preservation and alteration of food. Indeed, it is a whole system that encompasses other technologies that converge to improve and streamline the food system of this century. Thus affecting innovation throughout the agri-food value chain.

FoodTech is the new internet

A few decades ago, the internet was the wave of opportunity to be seized. As of 2019, when Beyond Meat became the first foodtech IPO on the New York Stock Exchange, the plant-based food industry was cemented as the new wave of investment to take advantage of. That IPO was the most successful since Yahoo went public in 1996.

In 2019, investment in foodtech startups globally reached a value of $19.8 billion (AgFunder). Only in Europe, investment in startups in this sector grew 106% compared to the previous year. Being increasingly dominated by plant-based foods.

In parallel, there is another sector within the foodtech sphere that is causing a stir worldwide, cultured meat. According to the global consulting firm McKinsey this industry will be worth approximately $25 billion by 2030. It will also be presenting opportunities within and outside the current food industry.

Although this area of foodtech is barely in its infancy, by 2020 cultured meat companies had already raised $366 million. Which is 6 times more than the previous year. As was the case with the internet a few decades ago, the foodtech sector is, and will increasingly continue to be, a major driver of the global economy.

Today’s food technologies are numerous and will continue to evolve. The following are the ones with the greatest impact on foodtech:

Blockchain: Launched in 2011 to track bitcoin cryptocurrency transactions, blockchain is a system by which transactions can be made between people around the world without the need for intermediaries.

Fermentation technologies: These are technologies for developing microbes to alter a certain substrate or produce specialized biomass. Humans have relied on fermentation processes for thousands of years to create and alter foods and beverages.

Bioprinting: It consists of the application of microfabrication technologies to the production of textured foods with functional characteristics. It uses cells and biomaterials to create organ-like structures and allows the cells to multiply. This technology has very practical applications in foodtech, especially for creating meat-flavored plant-based or cultured cell-based foods.

Cell Cultured technology: Speaking of cultured cells, this technology is used for manipulation at the cellular level that allows the industrialization of cell lines. Cells are obtained through painless biopsy and are cultured to create a significant amount of meat. The process does not require slaughter or harm to any animals.

Internet of Things: This is the set of devices, communication networks, and central services that make it possible to obtain data and automate different systems. The wireless digitization of today’s food industry is key to system efficiency. Especially considering the need for instant communication from one system to another for food production.

Robotics: Automates food creation and processing and can eliminate manual hazards on the production line. This technology increases the efficiency of food production in addition to improving quality.

Data Management: Information analysis and modeling systems using database technologies or artificial intelligence. For food production on a massive scale, the role of Data Management is key to maintain a reliable and updated record of each product that will enter the market.

E-commerce: This technology consists of technological tools that enable the implementation of electronic intermediation systems, both between companies and individuals. It is estimated that e-commerce revenues for the food sector will exceed 25.7 billion dollars in the U.S. by 2025.

Novel Foods: New ingredients and forms of production for the creation of foods with a healthier and more sustainable profile. According to the European Commission, Novel Foods are those that were not consumed before May 15, 1997, when the first regulation for Novel Foods was implemented.

Packaging: The elements for the protection and preservation of food in a healthy state, eliminating petroleum products. Many corporations are focusing on the implementation of ecological and biodegradable packaging. In addition to the reduction of excessive materials to protect food in the market.

Food plays an integral role in Spanish culture. It is no wonder the country keeps producing more and more foodtech startups. The gastronomy sector represents up to 33% of Spain’s GDP, according to a report by the multinational consulting firm KPMG.

In Spain, there are approximately 400 startups in the foodtech sector, according to the report “The state of foodtech in Spain 2020” by Eatable Adventures. These companies are very young, as more than 60% are less than three years old. Also, 13% were created in the last year, at the height of the pandemic. Moreover, the majority (35%) are direct-to-consumer models, whose growth has skyrocketed in the wake of the pandemic.

“Foodtech in Spain: Fuelling a More Sustainable and Efficient Food System” by ICEX

“Technology has allowed us to develop 100% vegetable meat that reduces gas emissions by 99% compared to animal meat. This will allow us to create the food system that society needs,” said Marc Coloma in an interview with Eatable Adventures.

Coloma is the co-founder of Heura Foods, the Barcelona-based vegan meat company that last month raised €16 million in an investment round.

However, entrepreneurship in this field has yet to reach the stature of other powerhouses, such as Germany, Israel, or the United States.

“I think [in Spain] there have been important steps and initiatives to support entrepreneurship that favor the enrichment and development of the entrepreneurial culture from educational environments, but there is always room for improvement,” said Iñigo Charola in an interview with Eatable Adventures.

Charola is the CEO of BioTech Foods, another alternative protein company founded in San Sebastian, Spain in 2017.

There is no doubt that things are changing in Spain, and the foodtech sector is playing an increasingly important role in the country. In January 2021, the Spanish government invested €250,000 in NovaMeat, a company that prints plant-based steaks. Plus, it awarded €5.2 million to the aforementioned BioTech Foods for the development of cell-grown meat.

The role of Eatable Adventures in the foodtech sector

Eatable Adventures promotes the Spain FoodTech Startup Program, an acceleration program whose purpose is to support the development of projects in this field with a solid technological base. 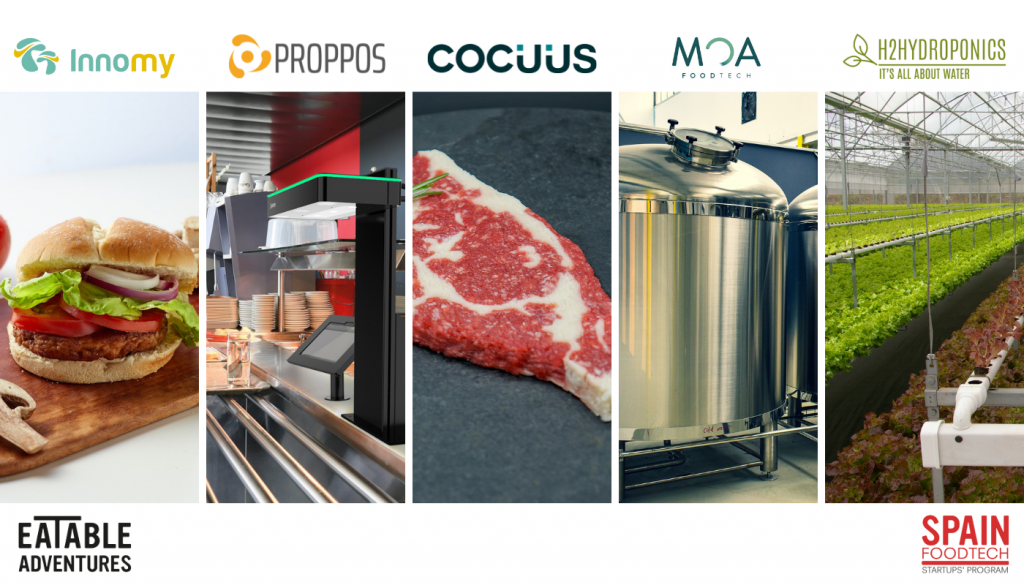 This program -supported by the National Center for Food Technology and Safety (CNTA) and ICEX Spain Export and Investment – already has its five finalist startups. These are Cocuus (large-scale bioprinting of plant-based product analogous to traditional animal protein products); Proppos  (AI and computer vision to offer an unattended payment solution in foodservice and supermarkets); Innomy (animal protein substitute products based on mushroom mycelium cultivation); H2 Hydroponics (designs, operates and delivers at full capacity hydroponic vertical and indoor farming facilities in countries with extreme climates); and MOA foodtech (biotechnology and AI used to convert waste and by-products from the agri-food industry into a next generation protein with high nutritional value and is 100% sustainable).